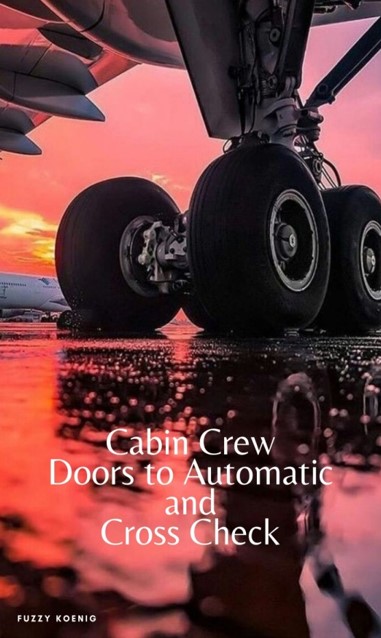 DOORS TO AUTOMATIC AND CROSS CHECK

A candid, frank, humorous, honest, factual and down to earth memoir of what it was like to fly as a flight attendant for South African Airways in the 1980`s. A reminiscent golden age of travel where flight attendants were regarded as an elite group of people who cruised the skies and had the world at their feet.

This ex flight attendant retrieves his old scrapbooks, photographs and logbooks out of the garage dating back 40 years and pens his memoirs of 12 years of international flying. From cabin crew training and crew scheduling, he reveals a step by step “behind the scenes” of what it was like to be a flight attendant on SAA, what they got up to in-flight behind those drawn curtains, the shenanigans on their layovers, the crew rituals, the aircraft types they operated on, the fabulous and exotic destinations they flew to and the upmarket hotels they stayed in.

Fuzzy gives a direct and to the point view of a green 19 year old youngster who was exposed at a very young age to life in the fast lane, his experiences onboard and how this job groomed and shaped him to tackle his future career in aviation management and the tourism industry.

“Cabin Crew - Doors to Automatic and Cross Check“ is filled with old photographs, logbook entries, training schedules and interesting paraphernalia. From sign on to sign off and everything in between, follow the chronology of a day in the life of an SAA flight attendant.

Sit back, relax and prepare for departure.

My 117 page eBook is available for download at only R150